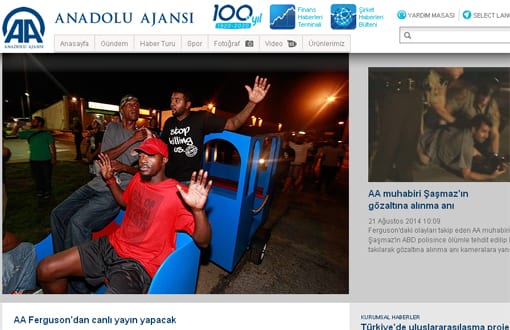 Anadolu Agency (AA) announced that they will broadcast Ferguson protests live. Having targeted many journalists during Gezi Resistence, AA had stated that broadcasting protests in the West is “their obligation.”
İstanbul – BIA News Desk

AA announced that they will broadcast protests against the police violence in Ferguson.

Today, AA announced that they will relay the incident live from corridors of the police station to their subscriptions. “Through the live broadcast, AA will report the protests that began with the murder of an African-American youth by a policeman in Ferguson district, St. Louis and stoke day by day” they stated.

Having claimed in the news stories that demonstrators attacked the police during Gezi Resistence in 2013, AA targeted many reporters and media organizations.

During Gezi Resistence, 6 demonstrators gathered outside of CNN International’s New York Headquarter and held a banner “True News is to watch in TRT” written on it. AA released that demonstration as “breaking news”.

AA stated that media organizations such as CNN International, BBC, and Reuters did coverage giving the impression that Turkey was in a civil war.

AA provided photos of Reuters reporter Osman Örsal, who took the photo of “woman in red dress” and photos of Bülent Kılıç, EFP reporter, Sedat Suna, EPA reporter, and Murat Sezer who took photos from Gezi protests to their subscribers. This case was brought to the parliament by İstanbul CHP deputy Umut Oran.

Besides, Kemal Öztürk, General Director of AA, tweeted “If ‘Occupy London’ movement appears in London, it is the obligation of AA to broadcast it live to the world”,  after CNN International broadcasted live protests and police violence in Taksim. Right after this tweet, AA provided G8 protests in London to their subscribers. (ÇT/MUY/BM) 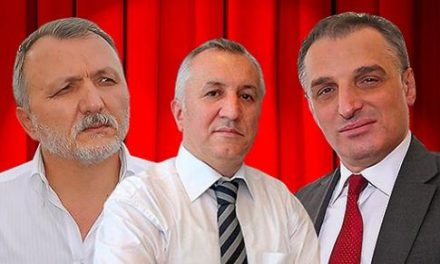